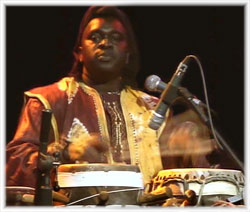 Musa started his career teaching drama, dance, singing & percussion at Secondary Technical School, Sukuta, The Gambia. He then turned professional, performing percussion, singing and dance and became very popular in West Africa. Later he was invited to become Technical Director of Youth Against Drugs and Alcohol, for a theatre group in Banjul lecturing people from Europe, on the subject of “Rhythm Communication”.

In 1988 he toured The Gambia and Senegal, with Gelawarr and Njom Music Band and played at The Gambian Cultural Festival, where he was awarded a certificate of recognition as the No 1 Percussionist in The Gambia.

In 1990 Musa joined Ifang Bondi and toured throughout Europe, following this he was invited to England by DB Music to record an album MBoob Mbalahal and then toured various education establishments, funded by Blechley Education Arts Centre, Redhill. Next he recorded a Gumbay Dance Band album titled “Dinkira”. Funded by “Sotokoto Project”, through “Higher Octive” USA.
In 1992 he was invited back to England to work with dancer Gallas Faye, performing at various venues and was contracted by Gambian Society in UK, to appear at the first Gambian Cultural Festival. In 1995 he performed several concerts with other African Artists as part of a collaboration with Tom Andrews, Music for Change charity, Canterbury.

Next Musa recorded his second album Jayulem, Get the taste, with Victor Mensah, of Africa Don, which was later promoted by Griotworld. Launched to critical acclaim, at the African Centre, Covent Garden, London.

After this Musa started his collaboration with Roger Watson, Traditional Arts Projects (TAPS), as part of Boka Halat, where he is still a key member of the group. While working with TAPS Musa has performed a variety of tasks including workshops and a project entitled “Your Village, My Village”, involving schools in the UK and The Gambia collaborating with Billy Bragg.

2003 Musa took two musicians to The Gambia as part of a South East Arts Council funded project called Jokka Adda, Cultural Collaboration, where they worked with a variety of different musicians throughout The Gambia and recorded many songs while there.

2006 Musa join the group Ubizo with Alan Skidmore and has played on their latest album and toured throughout Europe with them.

2007 Musa set up the HamHam, Exchanging Knowledge, project funded by the South East Arts Council. For this project Musa took eight musicians to The Gambia to work with four different Gambian tribes. While in The Gambia they recorded an album and upon returning to the UK they set up a new West African influenced band called XamXam with Ousman Beyai (Ifang Bondi).

2013 Musa was also invited in Oslo to lead a drumming group during the Gambian cultural week in Norway which is held every year.

2015 started working with the band Joko
Africa Express rendition of Terry Riley’s ‘In C Mali’ with composer Steve Reich with performance at the Tate Turbine Hall in London
Performances with Saidi Kanda Trio.

2019 Musa returned to his XamXam project releasing the album Bollo which means an interaction between two cultures or tribes working together for common goal.